Pompey Pals Charity research centre and museum will be open on Bank Holiday Monday (6th May 2019).

Free entry to the museum. Our plans to commemorate the Centenary of Armistice Day appeared in The News this week.

Click on the link below to find out more: On 10 November 2017, the Pompey Pals Project is holding a fundraising Armistice Day Dinner.  This event features a menu based on that served at the original Armistice Day 1918 dinner and will also include:
Guest speakers,
Music from Simon Cattermole
Raffle and Auction.

The Project sees this event as not only a way of remembering the men and women of Portsmouth who served during the Great War, but also a way to raise funds to preserve their memories as well as our future goal of helping their modern day counterparts.

Tables of 10 are available to book and tickets are priced at £30.00 per person.

The venue is the Purbrook Centre, Waterlooville and dress code is Black Tie or Uniform or Period Dress.

The Pompey Pals' Annual Commemoration at the War Memorial in Guildhall Square, had a Passchendaele theme this year.  It was a great honour that Donna Jones, Leader of Portsmouth City Council, Stephen Morgan and Flick Drummond; the new and previous members of Parliament for Portsmouth South and The Lord Mayor of Portsmouth were all in attendance at the event.

In contrast to last year's service, the sun shone meaning there were many people passing through Guildhall Square who joined in the commemoration enjoying the superb singing provided, once again, by the Portsmouth Military Wives' Choir.  The Last Post was played by Sam Gibb to mark the beginning of a perfectly observed minutes' silence whilst the standard bearers from the Royal British Legion lowered their colours in tribute to the fallen and Poppy wreaths were laid by the invited dignitaries at the cenotaph.

A video shot whilst on the "Pompey Remembers" Tour organised by Alan Laishley and Baxters Battlefield Tours - June 2017.

The film shows some of the memorials and cemeteries where the Pompey Pals who didn't return to Portsmouth, are commemorated in perpetuity.  The commemoration service held at The Menin Gate in Ypres every day at 8pm since the end of the Great War, is also included in the video.

Courtesy of Millstream Productions, we now have our first submissions on the Pompey Pals Project YouTube channel.

Having been created and produced by the students at Havant College, these films are exactly the kind of research and storytelling that the Pompey Pals Project aims to promote and encourage.  The first film covers the story of the Battle of Jutland and the effect of the huge losses on the local community in the Portsmouth  area and the other, Havant's Heroes, researches names from the Havant War Memorial to find out who they were and what they were like.

Today’s presentation was slightly different to the usual with Mike Hill telling the story of the Pompey Pals to people whose eyesight is impaired.  The audience was thoroughly engrossed by Mike’s storytelling and was very keen to handle the weapons and artefacts associated with the Pals.

Much fun was had trying to guess the function of the Fencing Musket and then the surprising discovery of the weight of the Short Magazine Lee Enfield rifle issued to all soldiers in WW1.

Examples of trench art were amongst the artefacts chosen for the presentation. The detailed workmanship of these items enabled those with impaired vision to explore them through touch and really get a sense of the craftsmanship achieved in the trenches with such limited tools available to the soldiers.

It was a very successful presentation with an attentive and receptive audience who were engrossed and fascinated by the story of our very own local heroes.

A number of talks have been booked in for this year. We have recently completed a talk at the Women's Institute and have talks booked in at various Libraries and other organisations across the area over the coming weeks and months. (See our Events Calendar for details).
Photo (Right): Table of merchandise and memorabilia at "Pompey's Hidden History" event at Fort Widley 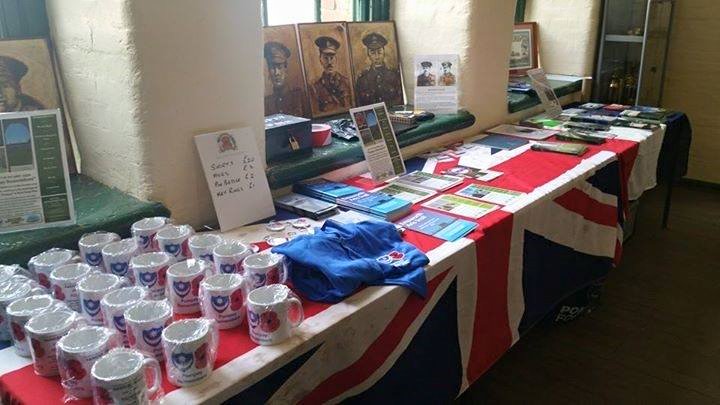 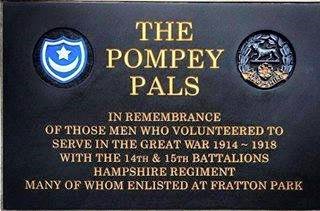 The Pompey Pals Charity
Registered No 1159596