Who were the Pompey Pals? 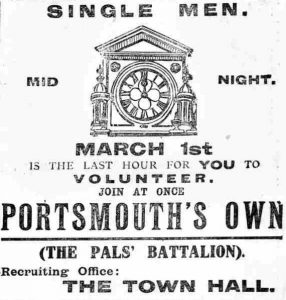 At the outbreak of World War One Lord Kitchener, Secretary of State for War, believed that the key to success would be overwhelming manpower and so set about looking for ways to encourage men of all classes to join the army. This was in contrast to centuries of military tradition as Great Britain had always relied on a smaller yet highly professional army. Previously officers were always drawn from the upper classes and other ranks mainly working class. General Sir Henry Rawlinson suggested that men would be more inclined to enlist in the army if they knew that they were going to serve alongside their friends and work colleagues.

Across the country thousands of eager young men flocked to serve their King and country and soon battalions comprising of those who had enlisted together in local recruiting drives, with the promise that they would all be able to serve alongside one another, sprang up. The popular press of the time dubbed these as PALS BATTALIONS.

In August 1914 the Portsmouth Citizens Patriotic Recruiting Committee chaired by the Lord Mayor J H Corke called upon the men of the city not already occupied in essential war work to form Portsmouth’s Own battalion. It was not long before the city, including the surrounding areas of Gosport, Havant, Cosham, Petersfield etc. had raised two battalions. Formally known as 14th& 15th (Portsmouth) Battalions Hampshire Regiment like the other Pals battalions which formed a major part of Kitchener’s ‘New Army’ they saw service on the Western Front from the middle years of the war, and would face a baptism of fire on the killing grounds of the Somme.

would have made the ultimate sacrifice.

Originally set up in partnership with Portsmouth Football Club to produce a lasting memorial to the Portsmouth Battalions, the POMPEY PALS CHARITY is now a ‘stand alone’ organisation which aims to commemorate all those men and women from the Portsmouth region who served in any capacity during the Great War, whether at home or overseas.

We are always happy to hear from anyone who had family members who served during the 1914 – 1918 war.